# GATE Exam # EC Electronics and Communication Engineering # Electronic Devices # EC GATE 2007 Prepare / Learn
Q3. The DC current gain (β) of a BJT is 50. Assuming that the emitter injection efficiency is 0.995, the base transport factor is

and their threshold voltages ae

the current I is

The gate oxide thickness in the MOS capacitor is
Answer : Option A Explaination / Solution:

The maximum depletion layer width in silicon is
Answer : Option B Explaination / Solution: 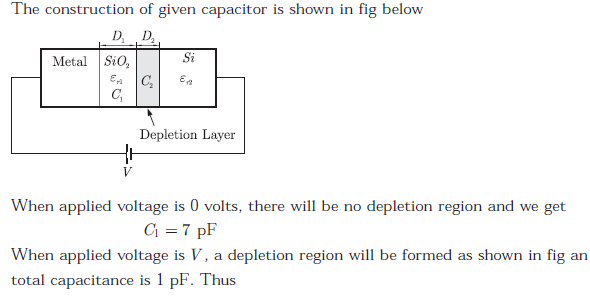 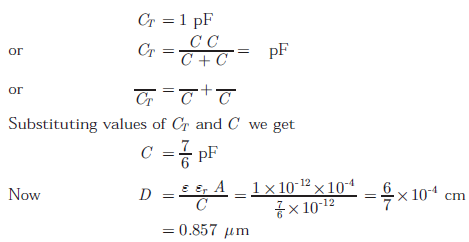 Consider the following statements about the C − V characteristics plot :
S1 : The MOS capacitor has as n-type substrate
S2 : If positive charges are introduced in the oxide, the C − V polt will shift to the left.
Then which of the following is true?
Answer : Option C Explaination / Solution: Depletion region will not be formed if the MOS capacitor has n type substrate but from C-V characteristics, C reduces if V is increased. Thus depletion region must be formed. Hence S1 is false If positive charges is introduced in the oxide layer, then to equalize the effect the applied voltage V must be reduced. Thus the C − V plot moves to the left. Hence S2 is true.

# GATE Exam # EC Electronics and Communication Engineering # Electronic Devices # EC GATE 2008 Prepare / Learn
Q10. Which of the following is NOT associated with a p - n junction ?