actually here firstly we select longest chain and it is of 3 carbon.and at number 2 position there is iodo as well as methyl ,so its name is 2-iodo 2-methyl propane.
is 2 – Iodo 2·methyl propane
# Haloalkanes and Haloarenes # CBSE 12TH CHEMISTRY Prepare / Learn
Q2. Give IUPAC names of the following compound:

Answer : Option C Explaination / Solution: Chloro is given priority so umbered as 1

# Haloalkanes and Haloarenes # CBSE 12TH CHEMISTRY Prepare / Learn
Q4. The following (CH3)2CHCH2CH2Cl
(CH3)2CHCH(Cl)CH3
(CH3)2C(Cl)CH2CH3
CH3CHCH2(Cl)CH2CH3
are the possible structural isomers expected to be formed if one of the hydrogen atoms is replaced by chlorination. The original compound is
Answer : Option B Explaination / Solution: 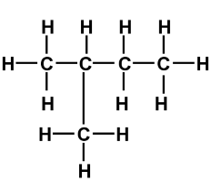 this is the original compound.
# Haloalkanes and Haloarenes # CBSE 12TH CHEMISTRY Prepare / Learn
Q5. Yield of the following compound is high

# Haloalkanes and Haloarenes # CBSE 12TH CHEMISTRY Prepare / Learn
Q6. For the same alkyl group, an alkyl bromide has a higher boiling point than alkyl fluoride because,

Answer : Option C Explaination / Solution: Vanderwall forces increases with increase in molecular mass and boiling point increases with vanderwall forces.. The main factor affecting the boiling point is the molecular weight, as can be pictured from the noble gases boiling point in the periodic table (the noble gases are those which have the weakest interactions due to their complete outer shell). But note that if you want to consider all the effects altogether, you must use Kelvins instead of Celsius. So going from 44°C to 88°C is not twice as much but a mere 14% increase. The other factor affecting boiling point is the nature and strength of intermolecular interactions, usually in the order ionic > hydrogen bond > dipole-dipole > Van der Waals. In the comparison of RF vs RBr boiling point, molecular weight is definitely in favor of higher boiling points for RBr, at least for small molecules. It is true that the C-F bond is much more ionized than C-Br so it will create stronger dipole-dipole interactions but not sufficiently to compensate for the effect of the mass increase.

Answer : Option B Explaination / Solution: AgCN is covalent in nature while KCN is ionic so KCN produces CN- in the solution. CN- is an ambient nucleophile i.e. it can form bond from both C and N atoms. KCN is an ionic compound so both C and N sides are available for the formation of bond, but C-C bond is stronger than C-N bond so cynide is formed. AgCN is a covalent compound so only N side is available for CN to form bond and thus isocynide is formed

Answer : Option C Explaination / Solution: These all are covalent compounds hence are soluble in organic solvents.

Answer : Option A Explaination / Solution: This is normal substitution reaction.